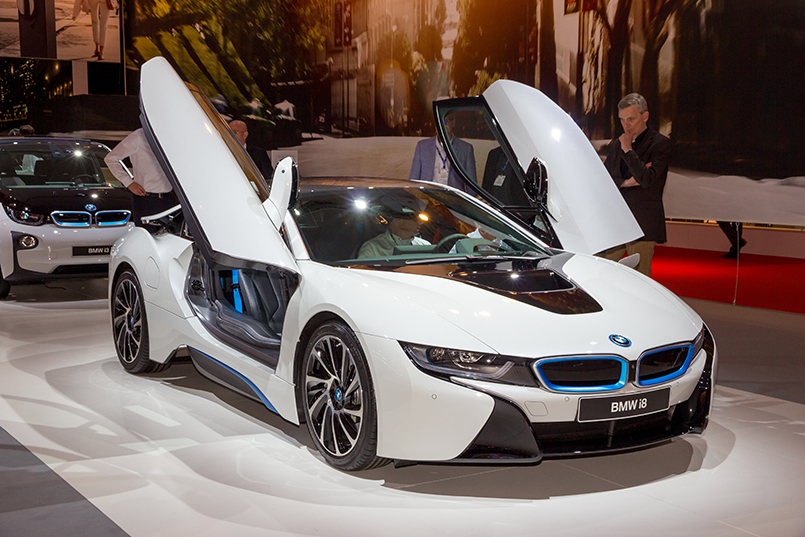 Posted at 14:10h in Reviews by James Halderthay 0 Comments

The BMW i8 is proof that a supercar can push the boundaries of what a hybrid car can achieve. BMW has been at the forefront of car innovations, and with its new super range of hybrid and electric cars, the i8 is a serious contender for becoming a classic of the new generation of EVs and hybrids.

The BMW i8 isn’t your average hybrid car next door like the Renault Zoe. It’s a powerhouse of elegance and design, it’s the future already here, but not so alien that it looks out of place on the road. The car has smooth lines that are also perfect for getting top speeds on the racetrack, so it’s a car for a day out and for the tarmac.

The interior doesn’t disappoint in the looks department either. The gull wings add an elegant flair to the overall design and the contrast of sleek blue and black are stunning to look at. Simply put, when you drive this car, you will be turning heads in the street.

How Does the i8 Drive?

The i8 drives like the supercar it is – thanks to its hybrid 1.5 litre turbocharged engine, as well as the mixture of materials used to make up its body. The lighter the materials, the faster something will go, and BMW have certainly stuck to that with the i8.

As with all electric and hybrid cars, there is no manual gearbox, but the i8 comes with a 6-speed automatic transition that quickly matches your speed. The beauty of the i8 is its dual driving modes. This is where the hybrid nature comes into its own and lets you have the best of both worlds. You literally shift the steering wheel to move into Sport mode, which uses petrol, or move it back to the right for Eco or Comfort Mode to make the most of the battery. The petrol engine kicks in when you need a burst of speed or go faster than 45 mph, which makes Comfort mode ideal for cruising around the city or slower country lanes.

The official timing for the i8 is 0-60mph in 4.4 seconds, which is slow for a petrol supercar, but given that the i8 is a super hybrid, that’s pretty impressive. The overall driving experience is as you’d expect with a lightweight body of carbon fibre – there’s little body rolling and the car feels light on the road.

Downsides include the road noise at higher speeds, and the fact that some noise comes from the speakers rather than the engine (which is said to give it a sportier feel without burning fuel unnecessarily).

How Does It Stack up on Running Costs?

When you’ve invested a lot of money in such a car, it’s a relief to know that the running costs are pretty reasonable. The i8 is said to achieve 135mpg and 49g/km – but on real roads this is more like 35 – 40 mpg. As a hybrid, you won’t feel the pinch when filling up at the pump, nor will your jaw drop when you check your monthly electricity bill.

Overall, the i8 was the first of its kind – an everyday hybrid supercar, and it delivers top notch performance with a nod to efficiency.